Namaskar, and welcome to the Basics of the Stock Market series.

For instance, how does the stock market works, how to earn returns, what things to follow and to avoid to become successful will be there in these series.

So, let us begin! 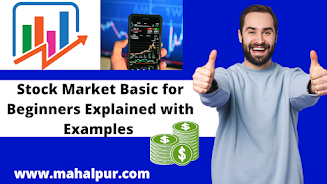 In the year 2014, Ronald Read was quite popular. The reason behind this was he was born in a normal family and for 25 years he worked at a 4 wheeler auto repair shop And, for 17 years he did cleaning stuff. Despite this, when in 2014 he died, his net worth at that time was $ 8 million (Rs. 56 crores).

Out of this 56 crores, Rs. 12 crores he gave to his family and the rest he gave for philanthropy, under which libraries and hospitals were made. Those people who knew Ronald Read didn’t have an idea that he had that much money.

He didn’t win that money in a lottery or got it from other sources. When people got to know about the exact reason behind such money they were shocked. Ronald Read made small investments in big companies of the stock market. These small investments in long term compounded to around $8 million (56 crores).

Thus, this was the story of Ronald Read. If you want more details of this story you can read The Psychology of Money for this.

If we talk about India, then it also has many such success stories. For instance, if we talk about Infosys, Its IPO came in the year 1993 when the value of its 1 share was Rs. 95 Slowly and steadily, Infosys was seeing its growth. If in 1993 you had invested 10,000rs in Infosys IPO then today its value would have been more than 11 crores.

In the past 27 years, Infosys has given annual compounding of 41% return, which is quite a good return.

There are many success stories like these. So, in these series we will discuss these success stories, what all things are important for success, etc will be discussed.
Also, in this investment world, there are many failure stories which will be discussed along with what to learn from these mistakes will also be covered.
We will also see how Warren Buffett, Ray Dalio, Carlis Slim Helu made billions and billions of money from the market.

So, lets start with the stock market history.

Till the year 1602, companies, in order to expand their business, used to raise capital in 2 ways.
There were lending institutions at that time, from where companies took money for their businesses for running and expanding it.
But, in the year 1602, Dutch East India brought in a new concept.
In this concept, they took money from people and gave them ownership in their company. This Dutch India Company’s format became popular and other companies also started to follow this concept.
Other companies also started to make money from the public and in return gave them ownership, and thus, this became more popular.
Among all these things, the Amsterdam Stock Exchange was formed, which was the world 1st stock exchange.
This concept became so popular, that it spread among other countries companies as well, like Spain, France, Portugal. Thus, this way the Stock market started in different countries.
This easy, in 1773 London Stock Exchange was established, in 1817 the Newyork Stock Exchange was established. NYSC is currently the world’s largest stock exchange.
NYSC is at Wall Street, due to which NYSC is also called as The Wall Street.

Then in 1996, Demat Account came, in which shares were stored online Before Demat account, people used to go to stock exchanges for the physical format of buying or selling of shares. But this problem was resolved after coming of Demat Account. Many times these physical formats got damaged or were stolen, so these problems were resolved by Demat Account.
In 1996, Nifty 50 which is NSE’s main Index was started, and in 1986 Sensex which is BSE’s main index was started What are Sensex and Nifty will be discussed further in these series.
Sensex has mainly 30 companies. The 30 companies which were there in 1986, can be seen on the screen. Sensex mainly had manufacturing companies. Companies which perform badly are removed from Sensex.
Companies whose performance is good are being added in Sensex. Today there are 7 such companies who are still in Sensex from 1986.
Rest 23 companies which are there in Sensex today are mainly of Technology and service-based. In 1986 there was no technology company or bank. So you can see how in 35 years companies have changed in Sensex From 1986 to today, Sensex has given annually 13.86% compounded returns to investors, which is much higher than other investment avenues.

Now we will talk about stock market returns

In the stock market there are 2 types of returns,

What is the dividend

When a company shares some of its profit with the shareholders, its called Dividend: The company doesn’t need to give a dividend to the shareholders
Whether to give a dividend to the shareholders or not, it is a call of the Management of the company. If the management decides to share profits with shareholders then they will declare a dividend.
But, if the company decides not to give the dividend, and to re-invest the whole money in the company’s growth, then they can do so.
To give or not the dividends is solely under the company’s management decision. Many companies are there who give regular dividend, like TCS, Infosys, Coal India, Oil India etc
Just like this, there are many companies who do not give dividend, for example, Avenue Supermart which is also known as DMart.
If we talk about TCS, the share price of TCS today is Rs. 3,000. In the calendar year 2020, TCS has given Rs. 40 per share as dividend.
Many government companies also give regular dividends, and because of this many investors strategise accordingly and invest in government companies who provide a regular dividend.
Government companies like Coal India, GAIL, Oil India, ONGCC etc give regular dividend. But investing through only dividend strategy is not that good. You might think about why? Well, we will discuss it further in this Article.

* Now we will talk about another type of return which returns you get by high share price the share market.

When a company in the long term performs well then its share price increases in the longer term
Just like that, when a company in the long term performs badly then the share price in the long term decreases drastically
In short-term, there are many fluctuations, but in long-term company’s share price follows the company’s growth. Let’s understand this with an example.
Many times people focus on the dividend while investing in a company and they don’t focus on the company’s business, and when the business doesn’t grow so automatically its share price also doesn’t grow.
For example, if we talk about ONGC, it is a government company which on a regular basis gives dividend but its business performance has not been so good.
Similarly, there are many companies who gave regular dividends but their share price growth has been negative, due to which they gave negative returns to investors.
For example, Coal India has given -9% annual return, GAIL gave -3% annual return, Oil India gave -10% annual return
From this we get to know that just focusing on dividends won’t work, one also needs to focus on the growth of the business.
There are many companies who give good dividends as well as have good business performance also like TCS, Infosys, HCL Tech, Reliance Industries etc.
For example, In 2010 TCS profit was Rs. 7001 crores which grew amazingly to Rs. 32340 crores in 2020, and it annually gave compounded return of 18%
Infosys in the past 10 years has given 11% annually compounded return, HCL which is India’s top technology company has given 24% annually compounded return in past 10 years. Reliance Industries also gave 15% annually compounded return in 10 years.
So you need to find such companies only.