Gold, who doesn’t know about gold. Gold has been valuable resources till now and also in future. Gold is use widely around the world. But the value of gold is never fixed. It causes due to supply and demand system. If the demand for gold increase and supply decrease, Value of gold increases. If it is opposite then the value of gold decreases. So basically, what we do is, we buy gold in low cost and sell it when the value increases keeping with some profit. That is trading.

So today in this post, we are going to learn about digital currency. Which is similar to gold and can bring more profit to you in certain time than gold. Only difference is that Gold has physical property but Digital Currency doesn’t.

What is Digital Currency? 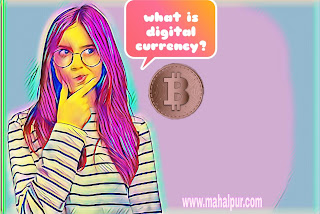 Amigos, Digital Currency’s a form of money that cannot be touched and doesn’t have physical appearance like other money of country. It is a type of money that is present only on the Internet in digital appearance.

Digital currencies are not very difficult to understand. Digital currency depends on the popularity of the people. And the more people trust it and start to use it for day to day usage, the more its price increases.

Friends, if you have watched the Money Heist show, then you must have understood that the value of any money increases only by the people who trust it in sums of money.

Even gold has a price, as long as people accept its services. People agree to exchange goods through it.

Similarly, Digital Currency is also known as Cryptocurrency. Its popularity has increased tremendously across the world. And one of the reasons for this is Blockchain Technology. 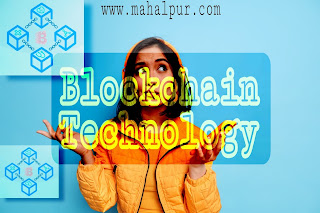 When the work of the block would be completed. Furthermore, it is closed by a proxy automatically. The new blocks will generate, Which will be attached to the old block just like a chain. That is why it is called Blockchain Technology.

Blockchain technology is a technology that relies on decentralized finance called Defi. It means that no one will be the owner of Digital Currency or Cryptocurrency.

It will be get connected through different types of Node i.e. system. And this connectivity will preserve the validity of this Cryptocurrency.

Even today in India, where the budget for the next financial year has been presented in the budget session of the winter session. Digital currency has been given validity in it. And investing in it and making a profit from it is legally accepted.

Today financial transactions are possible through Cryptocurrency. Just like with internet banking, with just a few clicks, you can send your money to another place or a country without touching visiting banks and waiting for long queue.

Similarly, Cryptocurrency is such a digital currency that you can use it in the same way. But its greatest advantage is that it does not have any single central point. Rather crores are central points.

And to complete any transaction, verification is done from those crores of points. For this a person is not required to verify, it is all verified by the system.

Because of Blockchain technology our gaming industry was able to evolve one step. Because of it, gamers like me and other can make a decent living from it. And in future, it going evolve more.

How many types of digital currency are there?

digital currency, whose names are as follows- 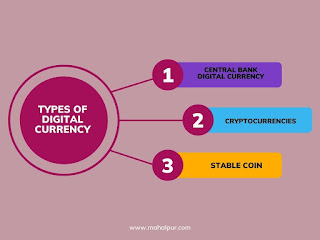 India is going to release it’s own central bank digital currency, which will be call as rupee. It expected date is from 2022-23.

Cryptocurrency is Defi. That is a decentralized financial system. It means, the financial system is not controlled by any institution further, it gonna be verified by different types of systems. And it is added based on the Blockchain system. In which NFT is also called Non-Fungible Token.

A stable Coin is any kind of variation of currency that is introduced in the context of Cryptocurrency to control and regulate Volatility. And its price is fixed in a way and is the most volatile like Cryptocurrency. ●   Digital currency removes the hassle of physically storing it.

●   The cash system does not work in this.

●   You do not need to invest your money or keep it in a bank, and no one can see it without your consent.

●   Digital currency can never be erased, and accounting for transactions is heavily simplified. It depends on Block Chain Technology.

●   Cross-border transactions can be done easily through digital currency. For which no fee is required.

●   It’s going to be very difficult to trace the person using Cryptocurrency or Digital Currency.

●   You do not need to reveal your identity to use Digital Currency.

●   In general, no government or organization can be successful in regulating digital currency, because it is a decentralized form of money.

Digital currency also has some disadvantages in itself such as-

●   Digital currency is not yet the most secure, so hacking is not impossible here.

●   If a country invests a huge part in digital currency and that part is hacked, then that country can come to its knees.

●   Digital currency can be used to erase the governance of any country because its price is very volatile.

People are the owners of their own money, there is no bank or institution. This vision has given a new position to Cryptocurrency or Digital Currency today.

If this vision is very secure in itself, the possibility of hacking is eliminated. Then in the future, digital currency can become the future of the whole world.

Q1. Can I use Digital Currency?

Q2. What is the Best use of Blockchain Technology?

Ans. Money Transfer and payment processing are the most excellent Blockchain Technology. And also it is helping for many artist to create art and have the ownership, without any worries. And able to sell their art which is consider as NFT.

Ans. Bitcoin and the market capitalization of the world’s top digital currency is more than $125 billion.

Q5. Which crypto currency should I farm from now?

Ans. Pi network. Pi crypto currency, some say it’s going to be huge as bitcoin when launch. If you wanna farm, then you can from mobile or pc no extra resources is needed. Just one phone all it takes.