Before telling you about VoLTE vs LTE and what are these actually mean, I want to tell you some important things about LTE and VoLTE. As an example, we can take Jio. 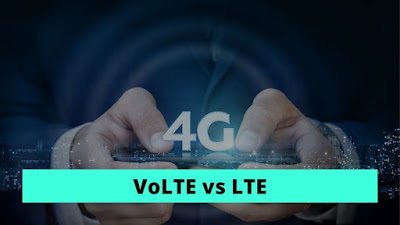 Let me tell you a little more easily, VoLTE uses a 4G LTE network and not a 2G or 3G network to make voice calls.

Most people have this misconception that 4G is used only for downloading, web browsing, and video streaming, so let me tell you that we can also use it to improve our voice quality.

Many times, people had many debates about LTE and VoLTE, which one is better in this, so that’s why I have tried to give complete information about what LTE is today.

LTE is a mobile technology standard.  Its full form – Long Term Evolution.  You must have always felt that why and why there is always talk of LTE.

Whenever we say something about 4G, it is because 4G (Fourth Generation) This name has been given to praise LTE technology.  Both 4G and LTE are the same thing.

One important thing here is that the Internet is needed in the LTE set to connect or call other mobiles.

LTE has brought a technological revolution to the CDMA and GSM standards, which we used to use a few years back.

Nowadays LTE network is being used everywhere, Internet Service Providers are gradually upgrading their networks from 3G to 4G.  It is slowly expanding its existence.

Do you have VoLTE on your Smartphone?

First of all switch on your phone, then turn on the internet, after that if the VoLTE symbol appears near the signal strength then it means that your mobile VoLTE is enabled.

Otherwise, it will display other alphabets like G, E or 2G, 3G, 4G.

If we think about the biggest achievement of VoLTE, then it will be its best call quality.  If seen, there can be more data transfer in 4G than in 2G and 3G.

Calls in VoLTE connect faster and better as compared to 2G and 3G.  Even where there is no 4G coverage, it can use 2G and 3G coverage to keep its network running.

Moreover, its frequency can also penetrate the walls of large buildings where 2G and 3G signals cannot reach.

Anyone who has used 4G must have come to know that the use of VoLTE will definitely increase the battery life of their phone.

This is because whenever you make or receive a call, your phone will have to be switched to another network such as 4G to 2G or 3G, as 4G calls do not have continuous switching to other networks, here the call ends.

After that, it comes in its normal network.

Due to frequent switching and not having to search for other networks, again and again, the user gets more battery life here.

Using VoLTE, you can make great video calls.  As we know that even before we were able to make video calls using other software like Skype.

But by using it we do not need any other 3rd party software.

If we want to understand the way any new technology works, then first of all we have to understand how it used to work in the first place.

Rather, the generations of mobile telecommunications technology are named according to G.

First, mobile radio telephone systems were used.  He could only send data over wireless.

I know you people will know about 2G, 3G, and 4G Network Technology.  Still, for your information, let me tell you that 2G network was made only for making voice calls.

Later, Packet Switching was adopted in 2G network, which led to the creation of Mobile Internet with the help of GPRS (General Packet Radio Service).

We must have seen the G symbol many times, it means that it is in the 2G network.

Later EDGE (Enhanced Data for GSM Evolution) replaced GPRS. If seen, the data rate of EDGE is up to 1Mbits/sec.

Due to this technology being present between 2G and 3G, it is also called 2.5G.

Difference between LTE and VoLTE

LTE may or may not support voice and data services at the same time without affecting voice quality, thus it is less efficient than VoLTE networks, while VoLTE enables faster voice call set-up.

If you are on the VoLTE network, both the users will experience continuous call sessions.

History of the Mobile Generation

If you understand the meaning of 1G, 2G, 3G, 4G, and 5G, then it will be easy for you to recognize the power of the underlying technology of the cell phone.

Most wireless carriers currently support both 4G and 3G technology, which is useful when your location allows your phone to operate at only 3G speeds.

The maximum speed of 1G technology is 2.4 Kbps.

2G: Cell phones got their first major upgrade when their technology moved from 1G to 2G.

This leap occurred in 1991 on the GSM network in Finland which effectively changed cell phones from analog to digital communications.

led to  2G telephone technology introducing data services such as call and text encryption, such as SMS, picture messages, and MMS.

Although 1G has been replaced by 2G and has been superseded by later technology versions, it is still used around the world.

The maximum speed of 2G with General Packet Radio Service (GPRS) is 50 Kbps.

3G: The introduction of 3G networks in 1998 meant faster data-transmission speed, allowing you to use your cell phone for data-demanding methods such as video calling and mobile internet access.

The maximum speed of 3G can be around 2 Mbps in non-moving devices and 384 Kbps in moving vehicles.

4G: The fourth generation of networking, which was released in 2008, is 4G, it supports gaming services, HD mobile TV, video conferencing, 3D TV, and other features that demand high speeds.

The maximum speed of 4G technology is 100 Mbps.

5G: This is the fifth-generation cellular network technology.  5G promises a faster increase in data rates, higher connection density, much lower latency, and energy savings, among other improvements.

The estimated theoretical speed of a 5G connection will be up to 20 Gbps per second.

I hope you like this information. Stay Connected with us for more awesome articles related to tech. Please do share with your family and friends.

Also Read – What is Wireless Communication?